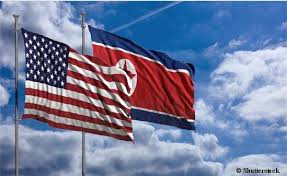 In his January 31 remarks at Stanford University in Palo Alto, California, Biegun — the State Department’s special representative for North Korea — noted that today’s U.S. and North Korean leaders “differ in both situation and approach” from past leaders.

President Trump is “deeply and personally committed to — once and for all — bringing an end to 70 years of war and hostility on the Korean Peninsula,” Biegun said, while Chairman Kim Jong Un “has stated his intention to denuclearize and turn his energies fully to meeting the needs of his people and developing the North Korean economy.”

U.S. officials have told their North Korean counterparts they will pursue the commitments made by Trump and Kim in Singapore in June 2018. Doing so will allow both nations to plan “for a bright future for the people of North Korea and the new opportunities that will open when sanctions are lifted and the Korean Peninsula is at peace, provided that North Korea likewise fulfills its commitment to final, fully verified denuclearization.”

Although there is much work to do, “we should not ignore the progress,” Biegun said.

Biegun emphasized that the U.S. remains clear-eyed in its approach to North Korea. “We need to have contingencies if the diplomatic process fails — which we do,” he said.

However, there are strong incentives to move forward, he said.

“President Trump has made clear that should North Korea follow through on Chairman Kim’s commitment to complete denuclearization, the United States will, in return, exceed anything previously thought possible.”