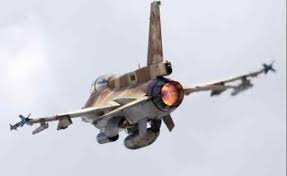 Israel targets 12 sites in Syria after dropping its aircraft

The Israeli occupation army announced that its aircraft targeted 12 sites in Syria after the fall of Syrian fire Syrian F-16 fighter jets, amid tension in the northern front of Israel.

The Israeli army said in a statement that it launched large-scale raids in the Syrian depth, targeting three pads of Syrian ground anti-aircraft and four sites belonging to the Iranian militias.

He stressed that he will continue his operations in Syria whenever needed, and pointed out that Syria and Iran are playing with fire, stressing that Israel is not interested in escalation.2 Israel

Sources said that the raids destroyed the observation tower at the military airport of Tifour in the south, and that the air traffic stopped completely at the airport.

He also referred to the explosion of a munitions depot belonging to the regime west of the city of Kaswa in the countryside of Damascus as a result of the Israeli shelling.

According to the tenth Israeli television channel, the raids targeted a unit of the Republican Guard in Damascus.

In contrast, a Syrian military source said that the air defense failed a second Israeli attack on some sites in the southern region.